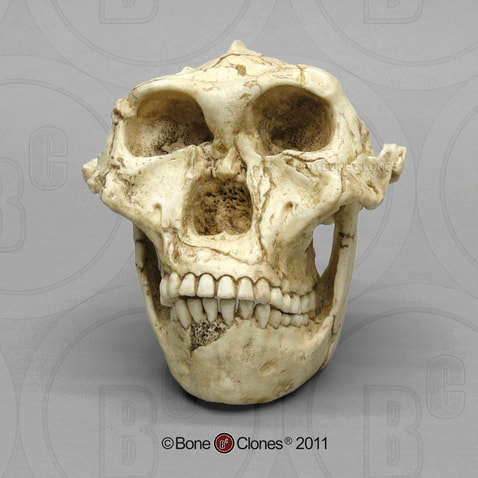 1.5 to 2 MYA. The Australopithecus (Paranthropus) robustus Skull SK-48 was discovered by Fourie in Swartkrans, South Africa in 1950 and described by R. Broom in 1952. SK-48, formerly called Paranthropus crassidens, greatly increased what is known about australopithecines. The Transvaal cave site where it was found was blasted by explosives but, remarkably, the skull survived. The skull was found with the right canine, the first premolar and all three molars intact. On the basis of the adult teeth and small sagittal crest, Broom determined the specimen to be an adult female. The Bone Clones® Hominid line is composed of discoveries from anatomically modern humans, archaic humans, early Homo, early hominins, and other hominids. The majority of the casts in this line have been recreated by our team of anatomical sculptors. Some are reconstructions made by anthropology professionals using fragmentary elements from original discoveries and extrapolating the missing parts from those (i.e. Neanderthal skeleton). Custom Display Stand available below.

The mandible that is pictured here with the skull was constructed on the basis of Robert Broom's additional discovery of SK 23 at Swartkrans. SK 23, the best preserved mandible from this area, was found close to the discovery site of SK 48. While considered to be a female of the same species, it is not presumed to be from the same individual. This mandible was then adapted to occlude with the SK 48 skull. 2-part skull (separate cranium & jaw).