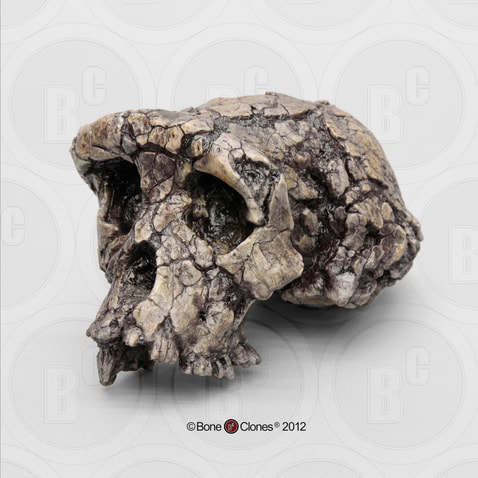 6-7 MYA. The Sahelanthropus tchadensis skull was discovered by Michael Brunet's team in Chad in 2001 and described in Nature in 2002. Some suggest that S. tchadensis existed near the time that hominids and apes separated on their evolutionary paths. It could be that this specimen is a representative of an early hominid, predating A. afarensis by 3 to 4 million years; on the other hand, it might be an ancestor of the gorilla. The characteristics of the cranium are a mosaic of hominid-like (short face, the size and shape of the canines), and ape-like (very large browridges and small brain case) features. The Bone Clones® Hominid line is composed of discoveries from anatomically modern humans, archaic humans, early Homo, early hominins, and other hominids. The majority of the casts in this line have been recreated by our team of anatomical sculptors. Some are reconstructions made by anthropology professionals using fragmentary elements from original discoveries and extrapolating the missing parts from those (i.e. Neanderthal skeleton).