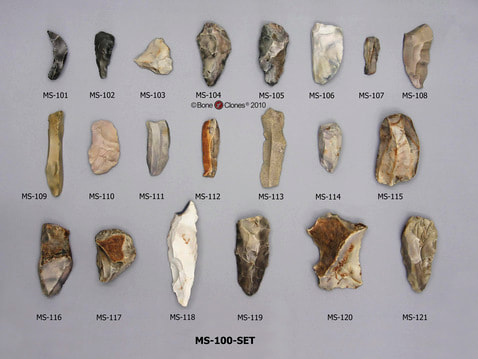 This set of 21 tools, which includes awls, axes, knives, scrapers, cores and hammer, was collected between 2000 and 2004 in Romania. While collectors searched the hundreds of caves in the Romanian Valley looking for fossil cave bears, these tools were discovered. According to Steve Wilson, who once owned the originals, the tools were collected by Walter Franz and taken to a museum in Germany where they were dated at between 85,000 to 125,000 years ago, part of the Mousterian Industry. Mr. Wilson obtained these from Mr. Franz. The originals now reside in a private collection owned by Mr. and Mrs. Craig Seleck of Florida.