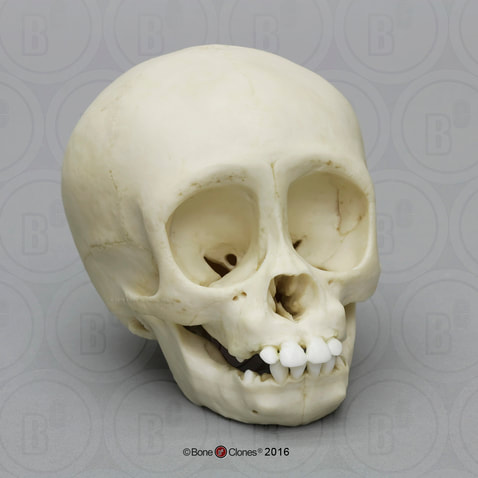 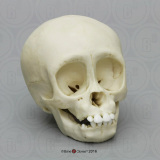 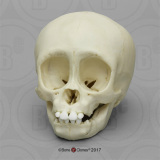 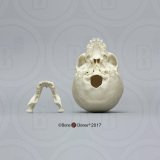 This 6 month infant gorilla skull is that of an individual with incomplete eruption of deciduous teeth, which is consistent with dentition expected at this age. During infancy (birth - 3 years) mortality rates can be high. For the first 5 months an infant remains inseparable from his/her mother, feeding hourly, riding on her back, and sleeping with her in arboreal nests. Infants break contact gradually, decreasing nursing and proximity until the entering the juvenile phase (3 - 6 years). With this long period of development, gorilla mothers invest many years caring for their offspring. Gorillas reside in polygynous groups with several females, their offspring, and usually one or more males. Infants grow up in stable social environments, with the Silverback mediating social conflict between infants and older individuals. On average, females give birth to their first offspring at 10 years of age and continue giving birth about every 4 years (consistent with the weaning cycle). Infant apes, especially gorillas, tend to mature skeletally much faster than infant humans, evident in the rate of deciduous tooth eruption. Complete deciduous tooth eruption occurs in infant apes at about 1 year of age, and in infant humans at a little over 2 years of age. Comparing the infant ape skulls (BC-207 Chimpanzee Infant, BC-208 Orangutan Infant) to our infant human skulls will help anthropology students understand the differences in growth rates among apes and humans. 2-part skull (separate cranium & jaw).