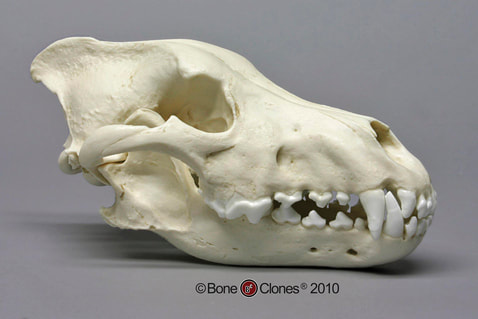 Thriving during the Pleistocene, the dire wolf is not a direct ancestor of any of today's known species of canine. They co-existed in North America with gray wolves for about 100,000 years. Dire wolves had short, thick legs, a larger, broader skull and more massive teeth than the modern wolves. Their brain case is also notably smaller than their remaining canine cousins. Remains of over 3,600 individuals have been recovered from the La Brea Tar Pits - more than any other species of mammal. 2-part skull (separate cranium & jaw).