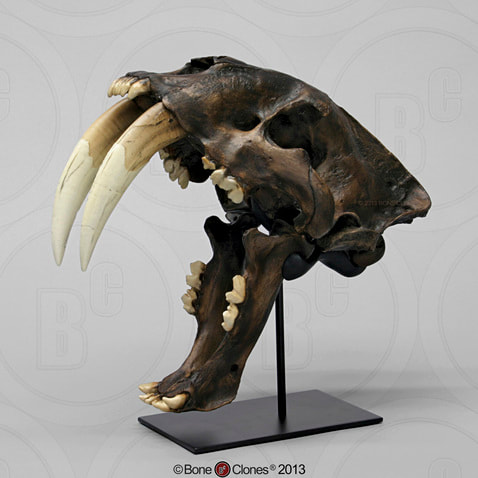 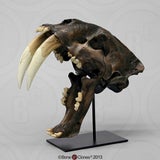 One of the finest specimens of a Smilodon fatalis (saber-toothed cat) from the world famous La Brea Tar Pits in Los Angeles. The La Brea Tar Pits is home to the most extensive collection of Pleistocene fauna in the world, with over 3.5 million specimens curated. Approximately 90% of the fossils excavated from the Tar Pits are carnivores, with the saber-toothed cat being the second most common occurring carnivore and named the California State Fossil. With canines measuring up to 11 inches in length from root to crown, this ferocious animal fed on bison, horse, camel and small pronghorn. Studies suggest the saber-toothed cat probably lived in packs, evidenced by bones with extensive healing, indicating survival after a crippling injury. This indicates the individual was cared for or at least allowed to feed with the rest of the pack