What is The Bone Room? 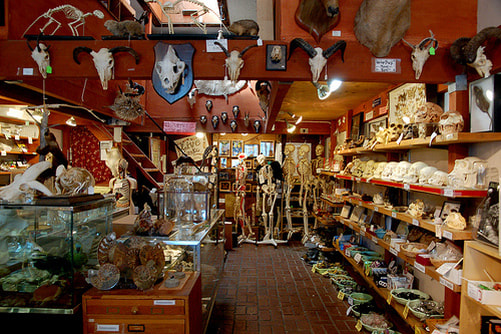 ​Founded by Ron Cauble (see Bio below), The Bone Room offers natural products to educators, artists, collectors and gift-buyers. The Bone Room has been in business for more than 30 years, first as a small room within a reptile emporium (The East Bay Vivarium), then as a tiny shop on Claremont Avenue in Oakland, then at a larger location on Solano Avenue in Berkeley. It was during its time on Solano that The Bone Room became a presence on the web, starting with a pioneering website in 1995.

The Bone Room is a natural history store - we always said that it was like a natural history museum, but that the exhibits were for sale. And indeed, there always was a museum feel to the shop, with drawers of pinned insects to be explored, stuffed and skeletonized animals in cases like dioramas, and fossils in cabinets, labelled with their scientific names. The Bone Room was famous - within its niche - around the world. Featured on Mythbusters, as well as having several appearances on local news magazines, written up in articles in local and nationwide publications, and listed in guidebooks, The Bone Room was a destination for travelers and one of the must-see places for locals to bring their visiting friends and relatives.

In 2010 The Bone Room took over the second half of the building on Solano, and began showing natural history-inspired art, and featuring science writers and lecturers in The Bone Room Presents. This ambitious undertaking, in the midst of a recession, turned out not to be profitable financially - but the contacts made throughout the academic and artistic world were, as they say, priceless.

We consider this to be merely the latest incarnation of The Bone Room; it's possible that sometime in the future, stores and galleries will again become popular and profitable; but for now, online is the way to go for small businesses, and having been doing mail order from its website for more than 20 years, The Bone Room is comfortable with that change.

We hope you will feel both comfortable and excited to be doing business with us virtually - even though Ron used to say that The Bone Room was a "non-virtual reality store". We still deal in the real thing, not just representations, and not just pixels. We want the public to be able to enjoy natural history in their own homes. We now have a logo, and a motto, and we hope you will join us in proclaiming:

About the Founder: Ron Cauble

When Ron was 9 and 10 years old, there was a sixth grade teacher at his school, Miss Willis, who filled her classroom with pinned insects, animal skulls, rocks, and terrariums full of snakes and frogs. What's more, she knew all about them.  Ron couldn't wait to be old enough to be in that wonderful classroom, with that wonderful teacher. Even while he was still in 4th and 5th grade, he would screw up his courage and bring her, in front of the whole tittering sixth grade class, offerings of moths and dead birds he had found, and he would ask her about them, and she would educate him about scientific names, and insect life cycles.

Finally, he was 11, and ready to enter 6th grade and be in Miss Willis's class, where he planned to be her star student, and take care of the reptiles, and learn all about every natural thing in that classroom - but all the things were gone. Miss Willis had married and moved to Oregon, and in her place was a P.E. teacher who knew nothing whatever about natural history. It was the biggest shock and heartbreak of his young life.

So, were the Vivarium and The Bone Room his re-creation of Miss Willis's classroom?


Ron was lucky enough to make a living doing the things that fascinated him as a young man - well, it wasn't luck, he purposely created his life. As a teenager he, along with his engineer uncle, would design and shoot off rockets; he was in charge of using his chemistry set to make more and more powerful and long-lasting fuel. His interest in chemistry and explosives was equal to his interest in reptiles, insects, and the natural sciences.

Ron got his PhD in chemistry from the University of Washington in 1968; as a captain in the Army, he spent two years working on the development of rocket fuels, working under Werner Von Braun in Huntsville, Alabama. After his stint with the Army, he moved to the Bay Area to start work at Livermore Labs - but he was laid off soon after starting, along with a hundred other recent hires.

Since his career involving his first love, rockets, seemed to be fizzling out, he turned without regret to something else that interested him, reptiles. The business he started in his basement, The East Bay Vivarium, he turned into the largest retail reptile emporium in the U.S., one of the first pet shops devoted solely to snakes, lizards and frogs. Since at the time there wasn't much knowlege, literature or support, he developed his own husbandry techniques, and, eventually, a widely respected breeding program - he was the first to successfully breed Childrens' Pythons, for instance.

The Bone Room was born in an anteroom in The Vivarium, when Ron became interested in the architecture of skulls; osteology led to entomology, and then paleontology, and The Bone Room became something like his own private museum, where he could think about and enjoy and share the myriad wonders of nature.

Ron was passionate about many things, passionate about life; he kept up on a wide ranges of interests, subscribing to journals and magazines ranging from Astonomy and Aeronautics to Science and Nature and Objectivism. His curiosity was infectious, and he loved engaging the people who came into The Bone Room, especially the ones who were 'amused' - he thought that was a perfectly correct and enjoyable reaction to his unusual store. His wide range of interests enabled him to talk to anyone - the loneliest professor with the most obscure field of study would be shocked when Ron could quote from some article pertaining to his own special interests.

Ron loved people, and loved talking with people. He often said that he "started businesses  so he would have a place he wanted to come to", but in large part what he loved about The Vivarium and The Bone Room was that they attracted people who enjoyed the things that Ron enjoyed.

Many many people miss him, and I miss him most of all.