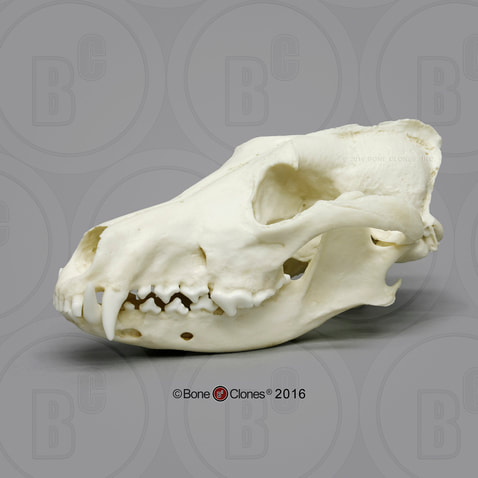 The red wolf is larger than the coyote (BC-143E) and smaller than the gray wolf (BC-004). Some authorities debate its identity considering it the result of the cross-breeding between the coyote and gray wolf, while some believe it to be a subspecies of the gray wolf. Of the estimated 300 red wolves in existence, approximately 200 reside in captivity and 100 are living in the wild. In 1967 the red wolf was officially listed as an endangered species and by 1980 was considered extinct in the wild. However, in 1973 the U.S. Fish and Wildlife Service started a captive breeding program. Of the 17 remaining true red wolves, only 14 successfully bred in captivity. In 1987 four pairs were re-introduced to the wild in North Carolina. Today, there are more than 50 red wolves in this area. 2-part skull (separate cranium & jaw).