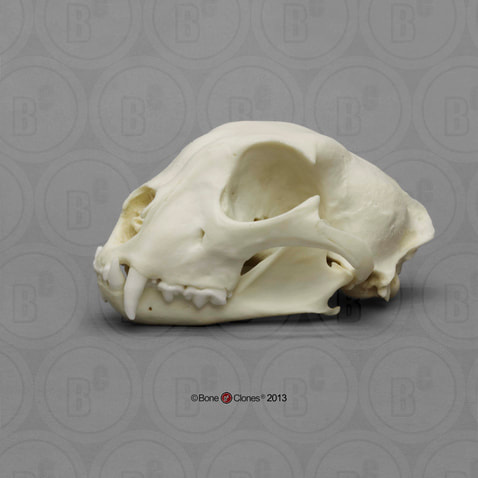 Africa's 10,000-12,000 remaining cheetahs are found only in scattered areas of sub-Sahara, with a remnant population of less than 100 in Iran. Their long legs, deep chest, long flexible spine and semi-retractable claws provide them the resources to claim the title of "fastest land animal" by running at speeds of up to 55 mph for short sprints. Cheetahs have long tails, short, coarse coats with small black spots, and weigh between 60 and 130 pounds, with males being slightly larger than females. They have small heads with high set eyes that are underscored by large, black teardrop shaped spots that help deflect the blazing glare of the sun. Their short muzzles contain upper canine teeth with foreshortened roots that provide them with room for a larger nasal aperture. This arrangement allows them to maintain a firm grasp on the prey's throat and yet still breathe well enough themselves to recover from their intense run. 2-part skull (separate cranium & jaw).