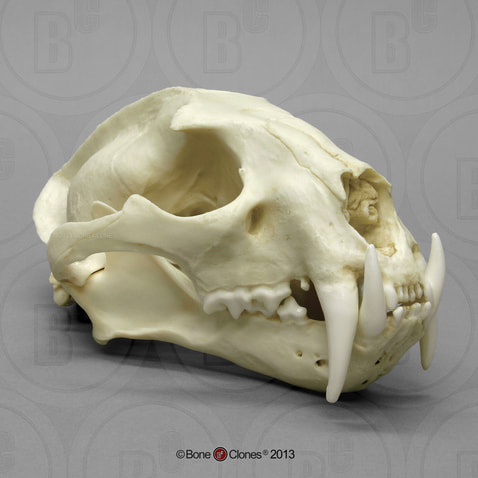 The clouded leopard is a medium-sized feline weighing 25 to 50 pounds. Its coat is distinctly marked with large, dark bordered ellipses shaped like clouds. The upper canine teeth of the clouded leopard are proportionally much longer than those of other felines. The posterior edge of the upper canine tooth is also very sharp, reminiscent of the teeth of the prehistoric saber-toothed cats. The diastema, or space between the canines and the first molar, is broad and the anterior pre-molar is absent, which permits wide bites. They have flexible ankle joints, which allow them to descend trees headfirst and to climb while hanging upside down under branches. Our Bone Clones cast is from a large adult male with exceptionally large canine teeth. 2-part skull (separate cranium & jaw).