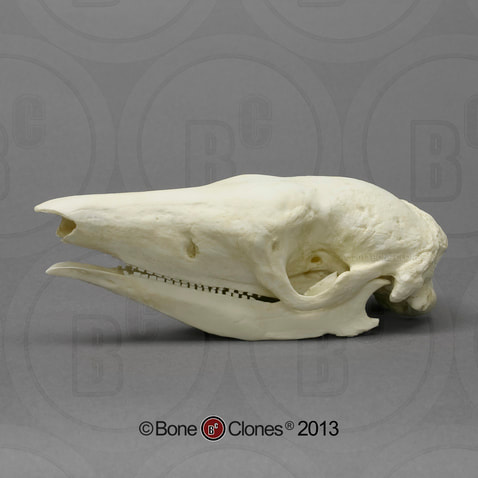 The giant armadillo is classified in the order Xenarthra, which means "strange joint," an apt description of their unusual cervical vertebrae. Xenarthra is a diverse mammalian group that originated in South America and includes the extinct giant armored gylpodont and the ground sloth. Armadillos have skin-covered bony plates protecting their body, head, neck, and tail. Giant armadillos are the largest living species and primarily inhabit the Amazon basin of Brazil, Paraguay and Argentina. They grow to over 3 feet long and weigh up to 70 pounds. They have very large front claws, including a huge, curved claw on their 3rd toe that is 10" long. They use them to open rock hard ant and termite mounds, as well for protection and defense. Their diet is mainly ants and termites but they are also known to consume carrion, worms and small invertebrates. Giant armadillos are so large and well protected, jaguars and pumas are their only known natural predators. They are highly endangered because of habitat loss and hunting for their meat and shells. Courtesy of Philadelphia Academy of Natural Sciences. 2-part skull (separate cranium & jaw).