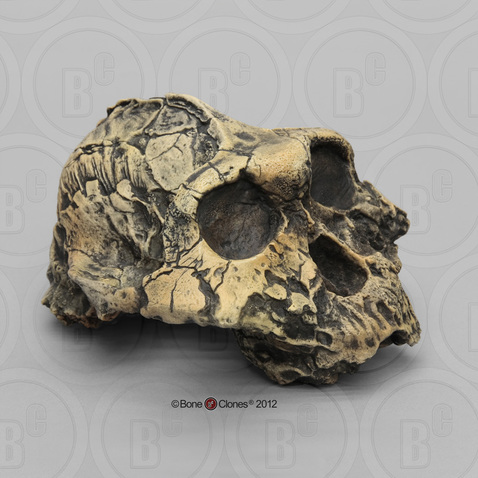 1.7 MYA. Male. The Australopithecus boisei Skull KNM-ER 406 was discovered by R. Leakey at Koobi Fora, Kenya, in 1969. This discovery helped to shed light on the controversial hypothesis that all australopithecines were of the same species, and tended to support the classification of boisei as a separate species of Australopithecus. A comparison of KNM-ER 406 and KNM-ER 732 revealed that australopithecines were sexually dimorphic. Some of the features possessed by this skull are sagittal and nuchal crests (missing in KNM-ER 732), massive cheek teeth, and widely flaring cheekbones, giving the face a dish shape. An interesting feature of this specimen is a little hole on the frontal bone, which may be rare evidence in early hominids of bone disease. The cranium is virtually complete and has a capacity of 510 cc. The Bone Clones® Hominid line is composed of discoveries from anatomically modern humans, archaic humans, early Homo, early hominins, and other hominids. The majority of the casts in this line have been recreated by our team of anatomical sculptors. Some are reconstructions made by anthropology professionals using fragmentary elements from original discoveries and extrapolating the missing parts from those (i.e. Neanderthal skeleton). Custom Display Stand available below.