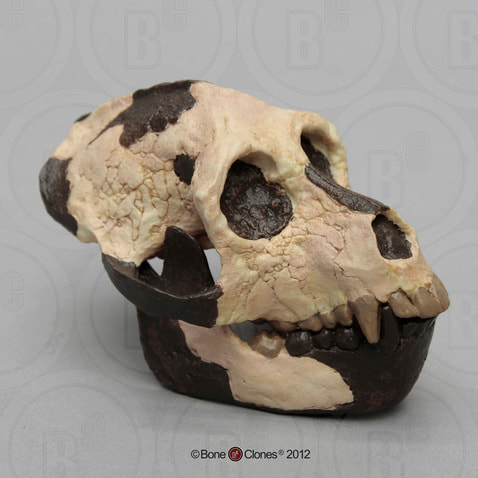 29 MYA. The Aegyptopithecus zeuxis skull was first discovered in the Egyptian Faiyum Depression by E. Simons' team in 1966. A. zeuxis is probably the best known of the propliopithecids (believed to be an ancestor of Old World monkeys and hominoids). With its long snout and small brain case, it bears a close resemblance to adapids (modern lemurs and lorises); however, its dentition points to a relationship to Old World higher primates (monkeys and apes). It had a 2:1:2:3 dental formula and a postorbital region enclosed by bone. Aegyptopithecus, sometimes called the "Dawn Ape," is an excellent example of a transitional form and an important link between earlier primates and the apes of the Miocene Epoch. Although the initial discovery yielded few remains, today we have a variety of specimens available for study. Differences in tooth size show a marked sexual dimorphism among members of this species. Primates that exhibit a high degree of sexual dimorphism (such as baboons) often live in large social units while those that display very little difference (such as gibbons) usually live in smaller groups. Based on this information, it has been determined that Aegyptopithecus zeuxis may have lived in large, complex social units. The few postcranial remains that have been discovered indicate that this propliopithecid was a slow moving arboreal quadruped, similar to the New World howler monkey, that was capable of leaping and some suspensory behavior. Our recreation was based on CGM 40237 from the Cairo Geological Museum, as published in The Journal of Human Evolution, (March, 1987, pp. 272-289) and a composite of two individuals, AMNH 13389 and YPM 21032. The cranium is from a sub-adult male. The Bone Clones® Hominid line is composed of discoveries from anatomically modern humans, archaic humans, early Homo, early hominins, and other hominids. The majority of the casts in this line have been recreated by our team of anatomical sculptors. Some are reconstructions made by anthropology professionals using fragmentary elements from original discoveries and extrapolating the missing parts from those (i.e. Neanderthal skeleton). 2-part skull (separate cranium & jaw).