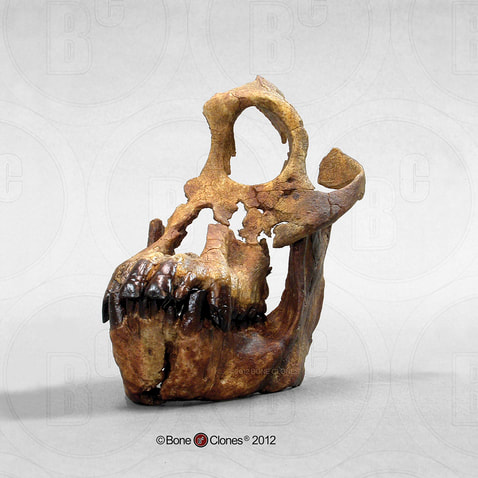 8.5 to 12.5 MYA. The Sivapithecus indicus skull was discovered in 1979 by D. Pilbeam and S.M. Ibrahim Shah on the Potwar Plateau, Pakistan. This specimen consists of a nearly complete mandible (with complete dentition) and the left side of the face. The facial characteristics of Sivapithecus suggest a very orangutan-like appearance; however, characteristics in the dentition, such as thick enamel on the molars, point to similarities to early hominids. Recent study of postcranial remains indicates that Sivapithecus was not entirely orang-like. In recreating this important Late Miocene specimen, every effort was made to preserve all details, colors and accurate measurements. The Bone Clones® Hominid line is composed of discoveries from anatomically modern humans, archaic humans, early Homo, early hominins, and other hominids. The majority of the casts in this line have been recreated by our team of anatomical sculptors. Some are reconstructions made by anthropology professionals using fragmentary elements from original discoveries and extrapolating the missing parts from those (i.e. Neanderthal skeleton). 2-part skull (separate cranium & jaw).