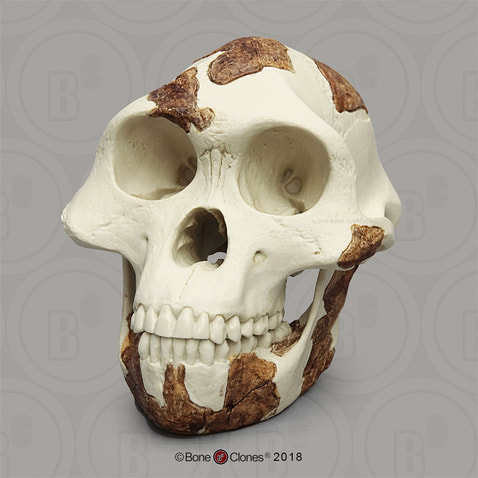 3.2 MYA. The Australopithecus afarensis skull "Lucy" was discovered by D. Johanson in 1974 in Hadar, Ethiopia. We began with exact sculpted replicas of the original jaw and skull fragments. Then, based on every cast and all the scientific data on Australopithecus afarensis we could find as reference, we interpreted the results and sculpted our version of "Lucy." Two versions of the same skull are available with the reconstructed areas in either light or dark brown finish, with the jaw and skull fragments in contrasting fossil color. The Bone Clones® Hominid line is composed of discoveries from anatomically modern humans, archaic humans, early Homo, early hominins, and other hominids. The majority of the casts in this line have been recreated by our team of anatomical sculptors. Some are reconstructions made by anthropology professionals using fragmentary elements from original discoveries and extrapolating the missing parts from those (i.e. Neanderthal skeleton). Custom display stands available.

Although the short stature of this female, only 3 1/2 feet, suggests that she was immature, eruption of the third molar provides evidence that this specimen was mature, and was simply a female representative of a sexually dimorphic species. The jaw shares features with both apes and other early hominids, with the shape showing some similarities to apes, with relatively large front teeth and parallel-sided tooth rows, and the size of the canine teeth being intermediate between apes and hominids who lived later. The cheek teeth are intermediate in size between hominids who lived earlier and those who lived later. The brain of "Lucy" was relatively small and overlapped in size with living apes; however, the shape of the pelvis, along with other characteristics of the postcranial skeleton, indicates that "Lucy" walked upright. At the same time, other characteristics of the limb skeleton indicate that members of this species spent time in the trees. This combination of an ape-sized brain in a hominid adapted to upright walking adds to the evidence that bipedalism occurred before the development of a relatively large brain. 2-part skull (separate cranium & jaw).