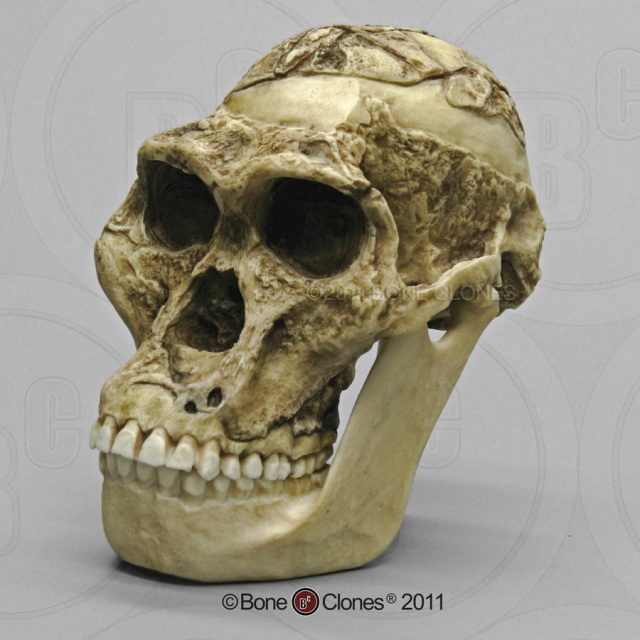 Considered to have lived 2.5 MYA, the Australopithecus africanus Skull Sts 5 "Mrs. Ples" was discovered in 1947 by R. Broom and J. Robinson in Sterkfontein, Transvaal, South Africa. The discovery of this nearly complete cranium of a mature specimen led to a much more positive reception of South African australopithecines as hominids. Twenty years earlier Raymond Dart labeled a skull found at Taung "Australopithecus africanus." The dentition of that skull indicates that it was a juvenile, which led to much criticism and broad dismissal of Dart's contention that the skull was a hominid; instead, critics considered it an ape. Like other early hominids, it had an ape-sized brain. The Sts 5 cranial capacity is about 485 cc. Compared to Australopithecus afarensis, it has a more rounded skull, a less projecting face, absence of cranial crests, and smaller front teeth. However, the front teeth are larger than in robust australopithecines. The cheek teeth are larger than in Australopithecus afarensis but smaller than in the robust australopithecines. The discovery of Sts 5 two decades later provided support for Dart's earlier claim. Originally thought by Broom to be a middle-aged female, Sts 5 is now considered by most to be a male. The Bone Clones® Hominid line is composed of discoveries from anatomically modern humans, archaic humans, early Homo, early hominins, and other hominids. The majority of the casts in this line have been recreated by our team of anatomical sculptors. Some are reconstructions made by anthropology professionals using fragmentary elements from original discoveries and extrapolating the missing parts from those (i.e. Neanderthal skeleton). 2-part skull (separate cranium & jaw).