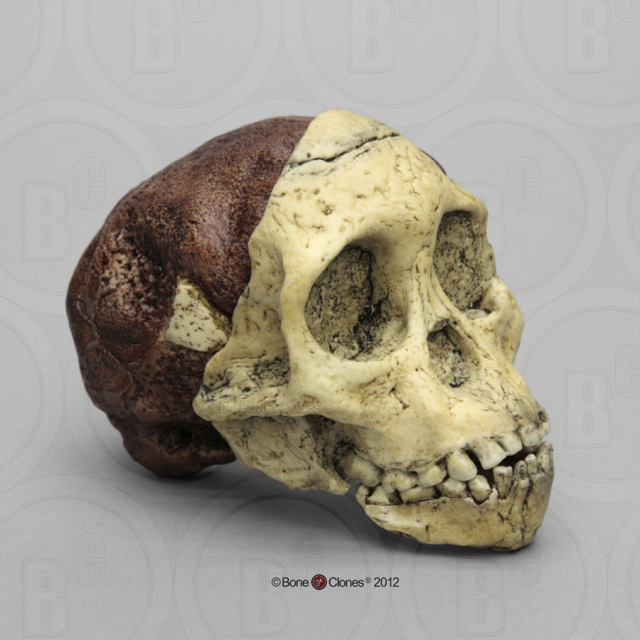 2.3 MYA. The Australopithecus africanus Skull (Taung Child) was discovered by M. de Bruyn in Taung, South Africa in 1924. Anatomy professor Raymond Dart identified this juvenile skull as a new genus and species of hominid in 1925 in Nature (Australopithecus africanus, which means "southern ape of Africa"). Dart considered his new man-like ape to be intermediate between humans and apes. The skull, though immature, features several hominid-like characteristics including: a rounded, high forehead lacking browridges, rounded dental arcade, no space between canine and first lower premolar, and a foramen magnum (the hole under the skull from which the spinal cord emerges) positioned forwardly under the skull, indicating bipedal locomotion. On the other hand, the child's cranial capacity is estimated at 405 cc, with a projected adult size of 440 cc., well within the ape range. It was not until other, adult, specimens were discovered in southern Africa during the next twenty years that Australopithecus africanus began to gain acceptance in the established scientific community. In 3 pieces: cranium, jaw and brain. The Bone Clones® Hominid line is composed of discoveries from anatomically modern humans, archaic humans, early Homo, early hominins, and other hominids. The majority of the casts in this line have been recreated by our team of anatomical sculptors. Some are reconstructions made by anthropology professionals using fragmentary elements from original discoveries and extrapolating the missing parts from those (i.e. Neanderthal skeleton).