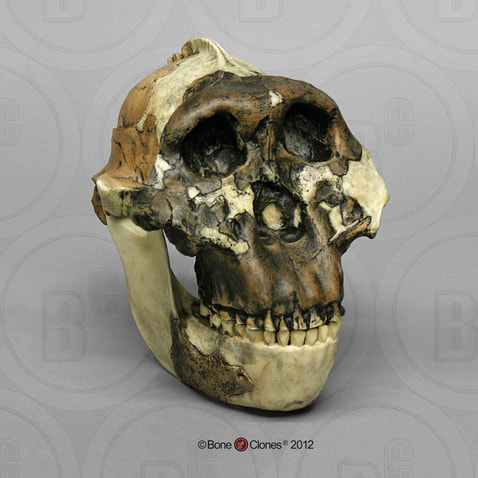 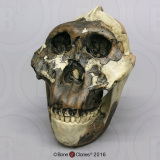 Bone Clones® Australopithecus boisei Skull with Jaw. Our jaw is based on available fragments and has been restored to articulate with our BH-015 Skull.

1.8 MYA. The Australopithecus boisei skull, is the most famous fossil from Olduvai Gorge, Tanzania. OH 5 was discovered by Mary Leakey in 1959 and originally classified as Zinjanthropus boisei by L. Leakey in Nature later that year. The accepted genus name has since changed to Australopithecus, this fossil is also know by the genus name Paranthropus. This discovery spurred paleoanthropology toward a modern, multidisciplinary approach, and focused paleoanthropologists' attention on East Africa. Unique in hominid evolution, A. boisei's massive skull features a wide, concave face, enormous, flat molars (about 4 times as big as modern H. sapiens) and cranial adaptations for powerful chewing, hence its nickname, Nutcracker Man. Note the sagittal crest and extremely large area for muscle attachments on the zygomatic arch. The thick jaw allowed for the species' exceptional chewing capabilities. Cranial capacity of this individual is 530 cc. The Bone Clones® Hominid line is composed of discoveries from anatomically modern humans, archaic humans, early Homo, early hominins, and other hominids. The majority of the casts in this line have been recreated by our team of anatomical sculptors. Some are reconstructions made by anthropology professionals using fragmentary elements from original discoveries and extrapolating the missing parts from those (i.e. Neanderthal skeleton). 2-part skull (jaw connected with removable hardware).