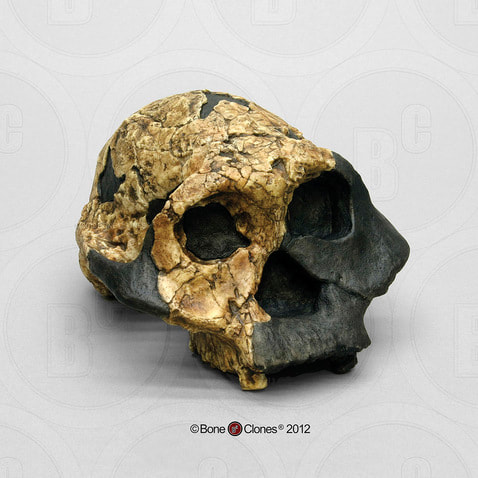 1.7 MYA. Female. The Australopithecus boisei skull KNM ER 732 was discovered in 1970 at Koobi Fora, Kenya by R. Leakey and H. Mutua and described in Nature in 1971. A comparative analysis of KNM ER 732 and KNM ER 406 revealed a host of similarities with the only differences (e.g., smaller size, lack of sagittal and nuchal crests in KNM ER 732) being typical of the sexual dimorphism found in great ape skulls. Consequently, KNM ER 732 is considered to be a female and KNM ER 406 a male of the species, Australopithecus boisei. Using the sexual dimorphism found in this pair as a guide, researchers suggested that A. robustus and A. africanus, which had been hypothesized by some to be male and female specimens of the same species, were, in fact, far more different than one would expect from simple sexual dimorphism. They proposed instead that A. robustus and A. africanus were separate species. The Bone Clones® Hominid line is composed of discoveries from anatomically modern humans, archaic humans, early Homo, early hominins, and other hominids. The majority of the casts in this line have been recreated by our team of anatomical sculptors. Some are reconstructions made by anthropology professionals using fragmentary elements from original discoveries and extrapolating the missing parts from those (i.e. Neanderthal skeleton).