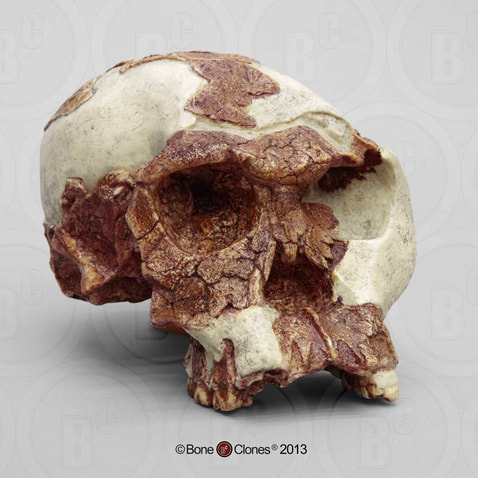 1.8 MYA. The Homo habilis Skull OH 24 (KNM) was discovered by P. Nzube in 1968 and first described by M. Leakey, Clark, & L. Leakey in Nature in 1971. This nearly complete but very badly crushed specimen constituted the oldest hominid found in Olduvai Gorge, Tanzania, and supported the designation of the then controversial species of Homo habilis. Originally, some scientists had resisted classification of Homo habilisas a new species, preferring instead to separate specimens into either A. africanus or H. erectus. Though OH 24 features characteristics of both species, there are marked differences. Its estimated cranial capacity of 600 cc is the minimum for classification as Homo, but the difficulties of reconstruction may have contributed to the smallish estimation. The species possessed a larger brain than A. africanus or A. boisei, though smaller than Homo erectus from Java and China. The cranial bones are thinner than typical for australopithecines, and the braincase is wider and shorter. The width of the face approaches A. boisei in breadth, but is not similarly flat. The facial profile of H. habilis slopes forward but projects less than in A. africanus. Some scientists believe that the range of variation of specimens once attributed to Homo habilis is too great to represent a single species; consequently, more than one species of early Homo may have lived at the same time in East Africa. The Bone Clones® Hominid line is composed of discoveries from anatomically modern humans, archaic humans, early Homo, early hominins, and other hominids. The majority of the casts in this line have been recreated by our team of anatomical sculptors. Some are reconstructions made by anthropology professionals using fragmentary elements from original discoveries and extrapolating the missing parts from those (i.e. Neanderthal skeleton).