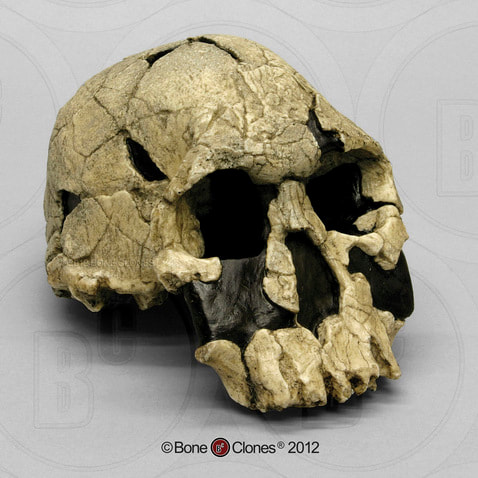 1.8 to 1.9 MYA. The Homo rudolfensis Skull KNM-ER 1470 was discovered by B. Ngeneo in 1972 at Koobi Fora in Kenya and described by R. Leakey in Nature in 1973. The classification of this specimen has been a matter of debate since its discovery, with some scientists arguing in favor of Australopithecus, and some in favor of a species of Homo. Originally dated (incorrectly) a million years before habilis, the most current theory holds that though contemporaneous and geographically concurrent with habilis, this specimen is in fact a different species of Homo. 1470 features a 750 cc braincase, too large for australopithecines, and perhaps even for habilis, and lacks the crests and heavy muscle markings that characterize australopithecine skulls, as well as lacking the brow ridges associated with Homo erectus. Several features differ from other habilis specimens (a longer face, squared upper jaw and short, shallow palate), leading some scientists to conclude that there is too great a range of characteristics within the specimens for them to be a single species. In 1986 Valerii Alexeev proposed another species within Homo, giving 1470 the scientific name Homo rudolfensis. The Bone Clones® Hominid line is composed of discoveries from anatomically modern humans, archaic humans, early Homo, early hominins, and other hominids. The majority of the casts in this line have been recreated by our team of anatomical sculptors. Some are reconstructions made by anthropology professionals using fragmentary elements from original discoveries and extrapolating the missing parts from those (i.e. Neanderthal skeleton).