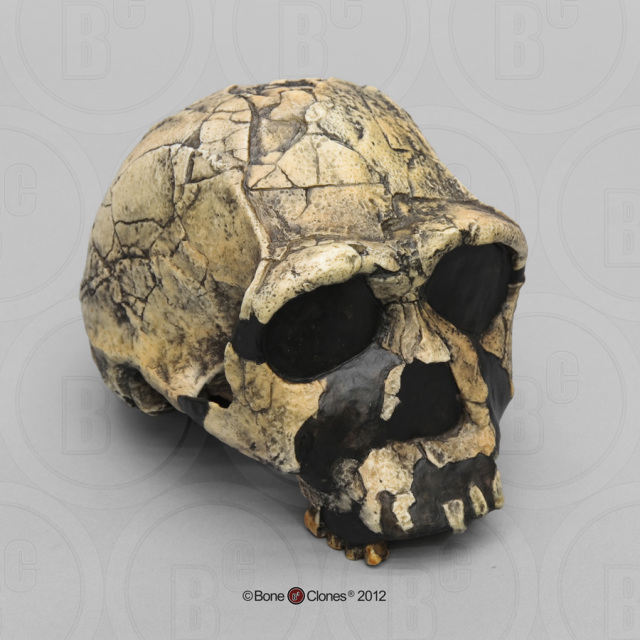 1.75 MYA. The Homo ergaster Skull KNM-ER 3733 with dentition was discovered by B. Ngeneo in 1975 in Koobi Fora, Kenya, and described by R. Leakey in Nature in 1976. Several teeth are intact, but no mandible was ever found. Of great significance is the fact that this skull was found in the same sediment layer that A. boisei KNM-ER 406 had been six years earlier, adding to the evidence against the single species hypothesis, the notion that only one hominid species existed at any time in history. Also known as Homo erectus, KNM-ER 3733 is said to be very similar in appearance to the H. erectus finds of Peking, China, including a cranial capacity of 850 cc, keeling of the cranium and the presence of an occipital torus. Due to its features (including wear on teeth and closure of cranial sutures) and compared to KNW-WT 15000, this specimen is considered to be a mature female. The Bone Clones® Hominid line is composed of discoveries from anatomically modern humans, archaic humans, early Homo, early hominins, and other hominids. The majority of the casts in this line have been recreated by our team of anatomical sculptors. Some are reconstructions made by anthropology professionals using fragmentary elements from original discoveries and extrapolating the missing parts from those (i.e. Neanderthal skeleton).