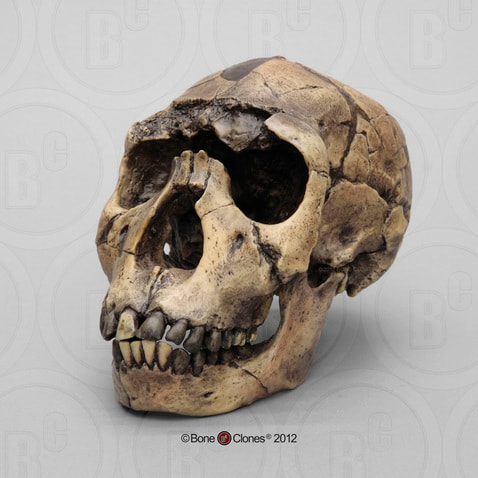 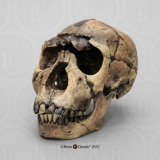 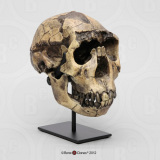 1.6 MYA. The Homo ergaster Skull KNM-WT 15000 "Nariokotome Boy" or "Turkana Boy" was discovered in 1984 in Nariokotome, Kenya. The first fragment was found by K. Kimeu and the rest of the find was excavated by R. Leakey, Walker and their team. It was first described by Brown, Harris, R. Leakey and Walker in Nature in 1985 as H. erectus. The completeness of this skull allowed scientists to get accurate measurements of brain size. Many other skeletal parts were also recovered, giving anthropologists a great deal of information regarding body size, limb proportions, age of death (probably 12 or 13 years) and whether or not language was possible. The pelvis reveals a greater ability to run than modern humans, and some bones reveal a closer affinity to australopithecines. The Bone Clones® Hominid line is composed of discoveries from anatomically modern humans, archaic humans, early Homo, early hominins, and other hominids. The majority of the casts in this line have been recreated by our team of anatomical sculptors. Some are reconstructions made by anthropology professionals using fragmentary elements from original discoveries and extrapolating the missing parts from those (i.e. Neanderthal skeleton). 2-part skull (separate cranium & jaw).