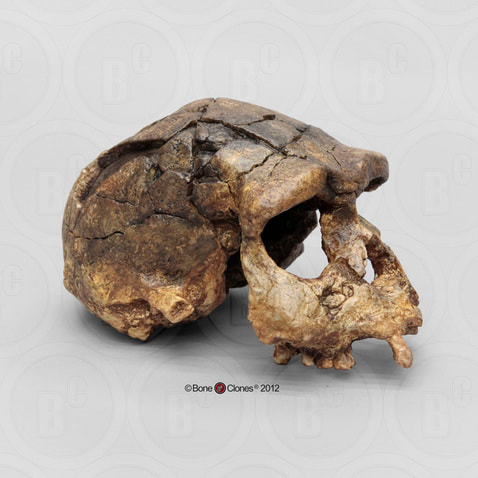 800,000 YA. Sangiran 17 was found in 1969 in Java, Indonesia, by Towikromo. Homo erectus exhibits more humanlike features than any other Homo species. Its features include a long, low cranium with thick bones, flat frontal bone with large brow ridges, a raised sagittal keel, an occipital torus, skull widest near the base, projecting face, and cranial capacity slightly over 1,000 cc. Fossil specimens of Homo erectus, estimated to have existed from 140,000 YA to 1.8 MYA, have been found in Africa, Europe, China and Indonesia. The Bone Clones® Hominid line is composed of discoveries from anatomically modern humans, archaic humans, early Homo, early hominins, and other hominids. The majority of the casts in this line have been recreated by our team of anatomical sculptors. Some are reconstructions made by anthropology professionals using fragmentary elements from original discoveries and extrapolating the missing parts from those (i.e. Neanderthal skeleton).