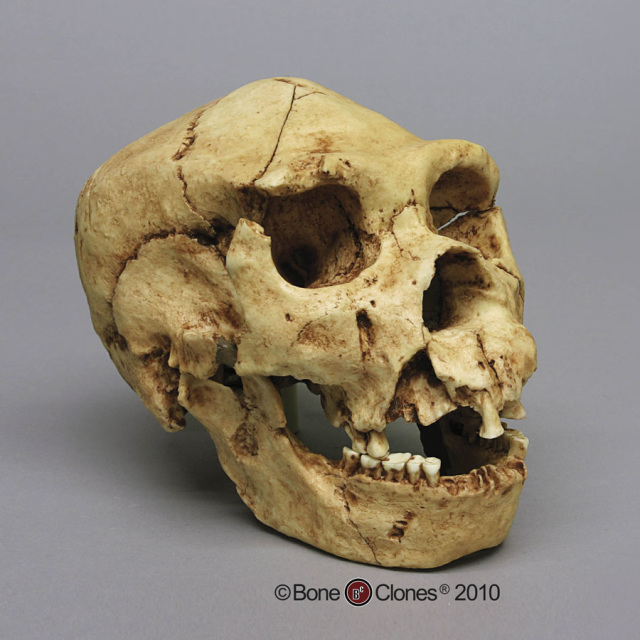 350,000 to 500,000 YA. The Homo heidelbergensis skull Atapuerca 5 was discovered in Spain in 1992 by Juan-Luis Arsuaga, in the fossil-rich caves of Sima de los Huesos (Bone Pit), Sierra de Atapuerca, This site has thus far yielded over 5000 fossil hominid remains. Although somewhat smaller than other H. heidelbergensis, this individual is considered among the most complete premodern skulls ever found. The cranial capacity is 1125 cc. The cranial features of skulls in the Sima de los Huesos collection, including cranial capacity, overlap the ranges for H. erectus, H. neanderthalensis, and modern H. sapiens. In fact, Atapuerca 5 shares many features with H. neanderthalensis, such as heavy browridges, wide nasal opening, and large, projecting middle face. Certain features, such as the shape of the cheekbone, do not occur in Neanderthals but do in modern humans. The Bone Clones® Hominid line is composed of discoveries from anatomically modern humans, archaic humans, early Homo, early hominins, and other hominids. The majority of the casts in this line have been recreated by our team of anatomical sculptors. Some are reconstructions made by anthropology professionals using fragmentary elements from original discoveries and extrapolating the missing parts from those (i.e. Neanderthal skeleton). 2-part skull (separate cranium & jaw).