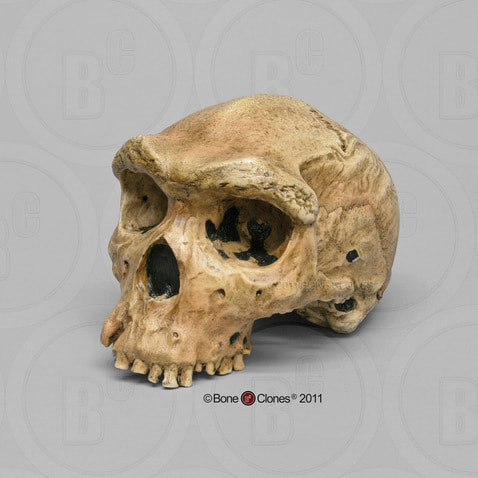 125,000 to possibly 400,000 YA. The Homo heidelbergensis Skull Broken Hill 1 (Rhodesian Man) was discovered in Kabwe, Zambia (formerly Rhodesia), by miner T. Zwigelaar and originally described by A. Woodward in 1921 in Nature as Rhodesian Man (H. rhodesiensis). This is the first human ancestor to be found in Africa. Once considered to be only 40,000 years old, which would make it a contemporary of Homo sapiens in Europe, the skull was pointed to by some as evidence of the "primitiveness" of Africans. Subsequent evidence led to the more correct dating of at least 125,000 YA. The skull shares features of both Homo erectus (heavy browridge) and Homo sapiens (flatter face, large brain (1300 cc). The Bone Clones® Hominid line is composed of discoveries from anatomically modern humans, archaic humans, early Homo, early hominins, and other hominids. The majority of the casts in this line have been recreated by our team of anatomical sculptors. Some are reconstructions made by anthropology professionals using fragmentary elements from original discoveries and extrapolating the missing parts from those (i.e. Neanderthal skeleton).