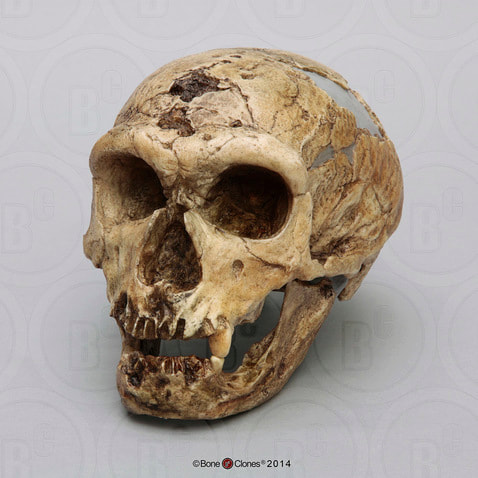 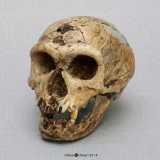 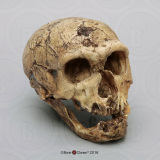 50,000 YA. The Homo neanderthalensis Skull was discovered by A. and J. Bouyssomie and J. Bonneval in 1908 in La Chapelle-aux-Saints, France. It was the most complete Neanderthal skull found at the time. Called the "old man," this individual clearly lived a long time, having much pathology, such as the declined tooth sockets in the molar region and severe arthritis in the neck. Despite his very large brain capacity (over 1,600 cc), early descriptions by Boule declared him to be primitive, leading to the term "Neanderthal" to be synonymous with brutality for decades. More recently, however, many consider Neanderthal to have been a highly successful and social species with many of its physical features, such as low cranial vault and projected face, due to adaptations to cold weather. This cranium is representative of many fossil remains of Neanderthals found throughout present-day Europe. The Bone Clones® Hominid line is composed of discoveries from anatomically modern humans, archaic humans, early Homo, early hominins, and other hominids. The majority of the casts in this line have been recreated by our team of anatomical sculptors. Some are reconstructions made by anthropology professionals using fragmentary elements from original discoveries and extrapolating the missing parts from those (i.e. Neanderthal skeleton). 2-part skull (separate cranium & jaw).