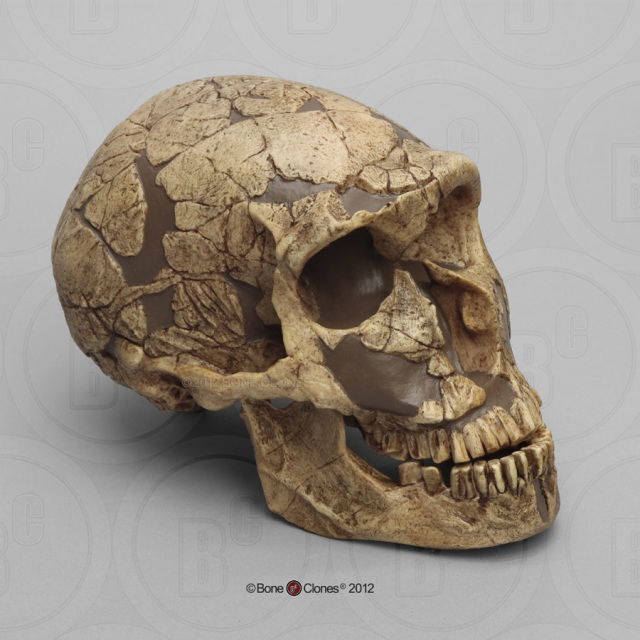 50,000 YA. The Homo neanderthalensis Skull La Ferrassie 1 was discovered in France in 1909 and described that same year by Capitan and Peyrony. A more thorough study of the La Ferrassie skeleton was published in 1976 by Heim. La Ferrassie is considered to be a "classic" Neanderthal, having features that best represent the features of its anatomy, including a low-vaulted cranium with projecting face and low forehead, pronounced double browridge, wide cheekbones, weak chin, heavily worn front teeth, a substantial nasal opening, and very large brain capacity (more than 1,600 cc). Some consider Neanderthal not much more than a subspecies, H. s. neanderthalensis, of Homo sapiens, and that, rather than becoming extinct, they were absorbed into the modern human population. Others consider them a separate species, H. neanderthalensis, that eventually became extinct. Neanderthals are thought to have lived between 200,000 and 30,000 years ago. The Bone Clones® Hominid line is composed of discoveries from anatomically modern humans, archaic humans, early Homo, early hominins, and other hominids. The majority of the casts in this line have been recreated by our team of anatomical sculptors. Some are reconstructions made by anthropology professionals using fragmentary elements from original discoveries and extrapolating the missing parts from those (i.e. Neanderthal skeleton). 2-part skull (separate cranium & jaw).