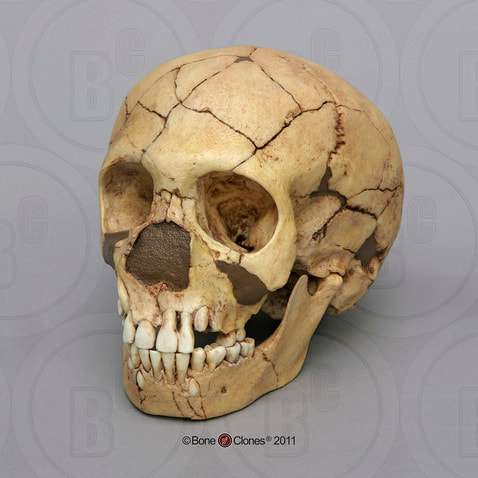 70,000 YA. The Homo neanderthalensis (Child) skull, Teshik-Tash, was discovered by A. Okladnikov in Uzbekistan in 1938. This skull helped establish the easternmost range of Neanderthals. It has been suggested that this skeleton was buried in a ritual fashion. With an estimated age of 9 years, this child had matured enough physically to exhibit distinctive Neanderthal characteristics, such as a large face and nasal area, a long, low cranium, a mandible without a chin, and a maturing browridge. The original cranium was reconstructed from approximately 150 fragments. The Bone Clones® Hominid line is composed of discoveries from anatomically modern humans, archaic humans, early Homo, early hominins, and other hominids. The majority of the casts in this line have been recreated by our team of anatomical sculptors. Some are reconstructions made by anthropology professionals using fragmentary elements from original discoveries and extrapolating the missing parts from those (i.e. Neanderthal skeleton). 2-part skull (separate cranium & jaw).