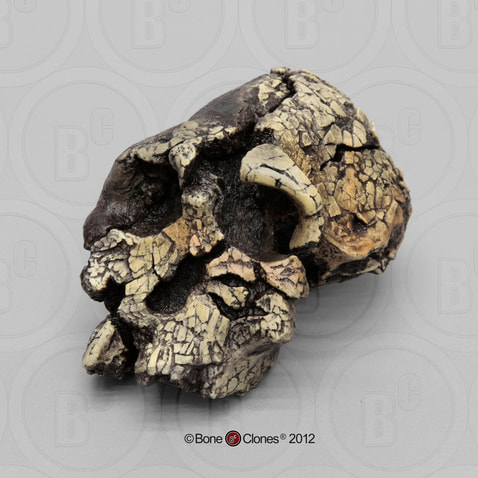 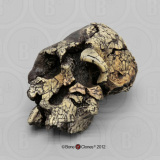 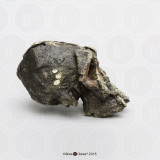 3.5 MYA. The Kenyanthropus platyops skull KNM-WT-40000 was discovered in 1999 by J. Erus (a member of Meave Leakey's team) west of Lake Turkana, Kenya. The specimen was described in Nature in 2001. Leakey and colleagues viewed the finds as being distinct enough from Australopithecus, particularly in the marked flatness of the face, to justify a new genus and species, Kenyanthropus platyops (meaning "flat faced hominid from Kenya"). Providing a second hominid species in the period from 3 to 3.5 MYA, this specimen challenges A. afarensis "Lucy" as the direct ancestor of modern human. Its classification as a separate genus is not uncontroversial, especially given the damaged condition (1,100 face pieces) in which the skull was found. Some scholars suggest that the skull's condition was such that its position in hominid evolution is hard to assess. The Bone Clones® Hominid line is composed of discoveries from anatomically modern humans, archaic humans, early Homo, early hominins, and other hominids. The majority of the casts in this line have been recreated by our team of anatomical sculptors. Some are reconstructions made by anthropology professionals using fragmentary elements from original discoveries and extrapolating the missing parts from those (i.e. Neanderthal skeleton).