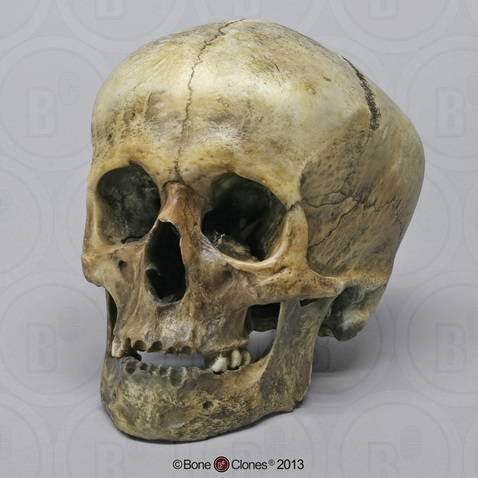 Aged somewhere between 72 AD and 472 AD, this skull was unearthed near the Coliseum in Rome, Italy. This skull is from a formal grave yard for known coliseum gladiators. Experts infer from the skull, that the individual was a large male in his 30's. This specimen shows unusual brachycephalic structure with a very high, near vertical forehead (frontal) and exaggerated occiputs. The exceedingly dense skull gives it weight and strength. Noteworthy on the skull is a large, healed "knot" of bone showing trauma. On the lower jaw is a green stain, which appears to be a wash of copper patina from metal that was in proximity to the skull after burial, perhaps a chinstrap. The original skull is in a private collection obtained from a turn-of-the-century phrenology institution collection in New York. 2-part skull (separate cranium & jaw).Homo sapiens

Aged somewhere between 72AD and 472 AD, this skull was unearthed near the Coliseum in Rome, Italy.